Herr Mertz made the best dolls in all of Europe. With their bisque faces, glass eyes and natural hair, they were almost lifelike. They wore silk and taffeta dresses, lace hair ribbons, and leather shoes with pearl buttons. Little girls in places as far away as New York, Melbourne and even Yakutsk clamored for Herr Mertz’s dolls.

Herr Mertz’s daughter, Anna, owned more dolls than any girl in Dresden. On a shelf in her bedroom sat three dozen dolls, and they all watched over her when she slept.

One night, Anna dreamt that her father sent her away to a boarding school deep in the Black Forest. The school was run by a cruel woman who forced Anna to lie on the ground, motionless, for hours at a time. The students weren’t allowed to speak to one another, and were hardly fed anything at all. If the students broke any rules, they were forced to sit alone in a dark box, or had to kneel with their noses touching the wall until they felt pain all over their bodies.

Anna decided to run away from the school, but before she did, she had to kill the headmistress. She stole a hammer from the tool shed and crept up behind the headmistress. The woman walked slowly, her long, forest-green skirts sweeping against the floor. Anna raised the hammer just when the woman turned to face her. She had a bisque face and no eyes. 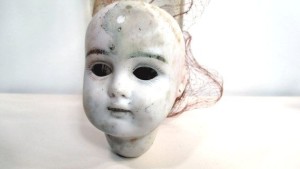 Anna woke up screaming. As soon as her eyes adjusted to the dark, she saw row upon row of bisque faces staring back at her. Anna continued to scream until her governess rushed into her room. She asked Anna what the problem was, and Anna said, “The dolls — they’re evil!”

“Don’t be silly,” said the governess. “They’re just glass and fabric and horsehair. They can’t think or speak or harm anyone. Go back to sleep now.”

The governess left the room. Anna finally fell asleep again, but her nightmare about the boarding school wasn’t her last.