Halloween is nearly a month away, and that means scary stories. I love stories about haunted houses. An old house with a sinking foundation and a porch that leans the wrong way, a house that’s full of spider-webby furniture — that’s a story I want to read.

But as a kid, I also loved scary stories involving dolls. And no, I don’t mean “Chucky.”

There’s another story I don’t quite remember, by the Puerto Rican writer Rosario Ferre. Again I only remember the end: bugs get inside the doll. The final image of the story is insect antennae protruding from the doll’s empty eye sockets.

It’s easy to see dolls as creepy. Especially those old German ones with teeth: 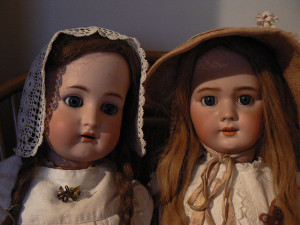 Just imagine you share a room with these two. You’re asleep. In the middle of the night, you wake up. A slice of moonlight falls across their faces. Wouldn’t you think, just for a moment, that they might murder you?

I don’t know what the Germans were thinking when they made these dolls. Are they intentionally creepy? Did early 20th century dollmakers decide that these stern, vacant-eyed creatures would deliver subliminal messages to children: toe the line or be eaten?

Hey. That gives me an idea for a story. I think I’ll write it up! Check back soon for my story about the scary dolls designed to make kids behave.